A couple of weeks ago my wife and I took a vacation in the Exuma Islands in the Bahamas to celebrate our 30th wedding anniversary. Now everyone knows what Bahamas Islands have plenty of: Water and the Sun. Lounging on the beach and swimming in the ocean with all shades of turquoise, we definitely got plenty of both water and the Sun. Case in point, this picture of me! 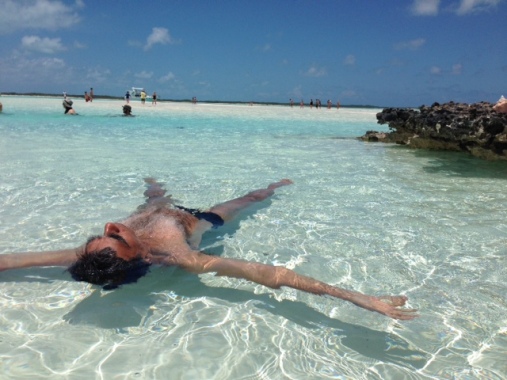 And, that got me thinking: So, how much Sun exposure one should have for optimal health?

On the positive side, we know that being in the Sun is very therapeutic. It cheers us up. Both because it is good for our disposition and it is a major source of Vitamin D.

On the other hand, we have all heard of skin cancer, eye damage and hypersensitivity that excessive exposure to sun can cause.

So, how do we balance the two for Optimal Health?

First, how much Sun do we need for daily dose of Vitamin D?

Most of the “experts” sort of punt this question saying that there isn’t one recommendation for everyone. This is because the amount of time you need to spend in the sun for your skin to make enough vitamin D depends on a number of factors. These include your skin type (how dark your skin is or how easily you get sunburnt), the time of year and what time of day it is.

In the Northern Hemisphere, (e.g., US, Canada) short daily periods of sun exposure without sunscreen during the summer months (April to October) are enough for most people to make enough vitamin D. Evidence suggests that the most effective time of day for vitamin D production is between 11am and 3pm.

A short period of time in the sun means just a few minutes – evidence suggests that about 10 to 15 minutes is enough for most lighter-skinned people – and is less than the time it takes you to start going red or burn.

The larger the area of skin that is exposed to sunlight, the more chance there is of making enough vitamin D before you start to burn. People with darker skin will need to spend longer in the sun to produce the same amount of vitamin D.

In the Northern Hemisphere, our skin isn’t able to make vitamin D from winter sunlight (November to March) as the sunlight hasn’t got enough UVB (ultraviolet B) radiation. During the winter, we get vitamin D from our body’s stores and from food sources. Hence great emphasis on Vitamin D supplements in the US and other countries in the Northern Hemisphere located at higher latitudes.

How much sun before you do damage to the Skin?

Now on to how much sun is needed to produce sun damage to the skin. Here also the clear answer is: It depends.

In research, often the measurement of damage used is the amount of UV radiation needed to cause erythema – the red flushing of the skin caused by exposure to sunlight. The theory is that more the erythema, the greater is the likelihood of damage and cancer.

Because of the variables of geography and seasons, and variations in how an individual reacts to sunlight, it isn’t possible to come up with hard and fast rules – but here are some useful guidelines.

The time when the skin makes most Vitamin D is when it’s exposed to the midday summer sun – but that’s the time the skin is most easily damaged.

However, redness can occur in only eight minutes in a mid-day sun.

So in peak summer times from 10 am to 3pm, you should use protection against the sun; shade, hats, clothing, sunglasses and sunscreen.

But earlier in the day and later in the afternoon, for a similar period of sun exposure and vitamin D manufacture, you get much less skin damage.

During the summer months in the Southern states in the US, for example, 10 to 15 minutes of unprotected sun exposure of the face, arms and hands before 10am or after 3pm, three to four times a week, will give you enough Vitamin D without skin damage.

But this may not be enough in Northern part of the US or Canada, especially in winter. You’ll need longer periods of exposure or more flesh exposed to the sun.

Note that the figures only apply to fair skinned people. People with very dark skin need around six times more exposure to UV radiation to produce as much vitamin D as someone with fair skin. These people may need sunlight exposure during peak times – i.e. the middle of the day – especially in the Northern states in the winter months.

On the other hand people with darker skins are less likely to get skin damage because of greater amounts of pigment in their skin. Even though they are still susceptible to getting skin cancer.

Based on what I just learned, for Optimal Health, I am going to stick to my Vitamin D supplements to get sufficient Vitamin D, year-round and heed to the following recommendation I found on the Skin Cancer Foundation website:

Q: I’m going to the Caribbean this winter. Are there any special precautions I need to take to protect myself from the sun?

A: (By Neil Sadick, MD, FAAD, FAACS, FACP, FACPh) When the days get colder and the nights get longer many people enjoy a vacation to a warm place like the Caribbean, to catch some sun and “recharge their batteries.” Typical winter vacation regions are located close to the equator, with little distinction between the seasons and high temperatures year-round. The sunny weather in these regions is accompanied by strong ultraviolet (UV) radiation, as the sun’s rays hit the earth at a more direct angle and aren’t as well-absorbed by the atmosphere.

Furthermore, these sunny days tend to be long, sometimes with substantial amounts of UV until early evening. The ability to travel from a winter season to a sunny vacation spot in just a few hours is a great comfort in modern times, but also a heavy burden for the skin. Current studies now show that sun-filled vacations and sunburns play a key role in the development of melanoma, the most dangerous form of skin cancer.

Intermittent, intense sun exposure, the kind you are likely to receive on a sun-drenched winter vacation (the sort that often leads to sunburn), is associated with a much higher melanoma risk than regular, everyday sun exposure. Suffering one or more blistering sunburns in childhood or adolescence, or five or more by any age, more than doubles a person’s lifetime chances of developing melanoma. Important precautions that protect you from the sun on your vacation include shade, sun-protective clothing, and sunscreen, as well as sensibly limiting your sun exposure in general.

The sunscreen you use should have a sun protection factor of at least 30 and sufficiently block UVA as well as UVB rays. (Look for “broad spectrum” or “multi-spectrum” protection.) If you’ll be vacationing near the water, a water-resistant or very water-resistant sunscreen formula is recommended. Apply approximately one ounce of sunscreen (two tablespoons) to the whole body, and reapply every two hours or immediately after activities such as swimming, sweating, or rubbing/wiping.

Loose-fitting, long-sleeved shirts and long pants made from tightly woven fabrics offer the best protection from the sun’s UV rays. You may want to look for clothes that have a UPF (ultraviolet protection factor) label of 30+; a shirt with a UPF of 30, for example, will let just 1/30th of the sun’s UV radiation reach your skin. High-UPF athletic gear may be particularly helpful, since such clothes are meant to keep you cool and comfortable, no matter how hot the weather gets.

Finally, a hat with a brim at least 3” all the way around and UV-blocking sunglasses will also help protect the vulnerable skin on your head, face, neck, and tops of the shoulders. Sensible sun behavior means avoiding tanning and burning as well as seeking the shade between 10 AM and 4 PM (and especially between noon and 2 PM, when the sun’s rays are strongest).

What are your thoughts on this topic?

I would love to learn from you and share that knowledge with others.